Food not only can cause an immediate allergic reaction, like peanuts that make a throat swell shut, it can also cause inflammation in our blood vessels, intestines, brain, etc. This is called systemic inflammation.

To detect this inflammation within us we have to eliminate certain food groups from our diets and closely observe how our body responds. It is a bothersome process but the rewards are high if you really do clear up systemic inflammation. Not only does the risk of a heart attack or stroke decrease but you may reduce weight, brain fog, fatigue and other things that have been bringing you “down.”

Let’s talk about the basics of inflammation and what you can do to determine whether or not the foods you’re putting into your body are causing systemic inflammation.

So, why does inflammation occur?

Inflammation is part of the immune process that fights invaders like bacteria and viruses. Though systemic inflammation sounds scary, inflammation itself is not always a bad thing. It aids in the speedy delivery of repair materials in the blood to damaged tissues. The term comes from the Greek word “inflamo” which means “I ignite” because inflamed areas feel warm.

When you step on a nail or get scratched deeply your body starts the inflammation process. Bacteria driven into the moist, warm, and nutrient rich tissues quickly multiply. Patrolling white blood cells recognize the bacterial protein as foreign and raise the alarm by releasing chemicals that cause inflammation.

These powerful chemicals, called cytokines, are the key to understanding inflammation. “Cyto” means cell and “kines” means movement. Cytokines are the chemical messengers sent out by white blood cells. There are dozens of different types of cytokines and they profoundly change cells. For example, cytokines can make the cells lining the arteries put out receptors to grab molecules (sugar) that end up clogging the arteries.

The cytokines cause capillaries (very small blood vessels) to become permeable and leak out plasma—the watery part of the blood. Swelling, redness, pain, and warmth are the results of white blood cells and nutrients flowing into the tissues. Cytokines keep the area inflamed and tender until healing is well under way.

An extreme example of systemic inflammation is sepsis. This is an inflammatory reaction to bacteria in the circulatory system (say from a foot infection) the immune system could not contain. Sepsis, formerly called blood poisoning, kills thousands of people each year. The cytokines released into the bloodstream shock the system with inflammation severe enough to cause organ failure. Antibiotics help tremendously but people regularly lose their lives and limbs to sepsis.

Infection by a virus or bacteria is not necessary to cause systemic inflammation—an allergen can do it. An allergen is a molecule that triggers an immune response like an allergic reaction. White blood cells respond to a harmless protein like they do to a dangerous bacterial or viral protein and release cytokines into the bloodstream.

Because each of our immune systems is unique and unpredictable, who gets which disease as the result of an allergic reactions seems random and mysterious. The unpredictability results from previous protein exposure (for example pollen, bacteria etc.) and the person’s genetics.

Asthma is a familiar example of inflammation of the respiratory system. In asthma, the lungs react to an allergen like pollen or mold with inflammation. This inflammation causes the linings of the airways to swell and restrict airflow.

Food or other proteins (like from poison ivy) can trigger allergic reactions and systemic inflammation of different strengths. The trick is to identify food groups that barely trigger an immune response.

Other problems caused by systemic inflammation:

Oops!—The immune system didn’t mean to kill or cripple you

In trying to fix your body, inflammation can cause great damage—especially in our blood vessels. Recall the cytokines are inflaming the cells lining the arteries! The inflammation causes fatty deposits called plaques to develop on the walls of the arteries. These deposits can eventually break loose and cause heart attacks and strokes.

An extreme example of a food allergen disease is celiac disease—caused by the wheat protein called gluten. Gluten can cause violent diarrhea as the lining of the intestine undergoes inflammation after attack by the white cells. The walls of the intestine become permeable, fluid is drawn from the blood into the intestine, and expelled as the body tries to quickly expel the allergen.

Many more people have a less serious reaction than celiac disease called wheat sensitivity. Bloating, diarrhea, constipation, headaches, bone or joint pain and other symptoms disappear upon removal of gluten from their diet. The symptoms can flare up or disappear randomly.

Often people do not associate wheat with their symptoms. That’s the problem. We don’t react hard enough to associate a food group with some symptoms. We just don’t feel right, randomly gain weight, and can’t associate it with any one thing.

Inflammation in our gut affects weight loss and health

A large part of the food allergen story affecting inflammation involves the gut’s bacterial population. These bacteria are known as the microbiome. The microbiomes’ “good” bacteria produce substances that keep the gut’s lining healthy and strong. The intestinal cells produce a protective mucosal layer that selectively feed the good bacteria.

Eating an inflammatory food like sugar or gluten or any food you are sensitive to, changes the microbiome. These inflammatory foods allow the bad bacteria to flourish and cause excess gas, diarrhea, constipation, aches, etc. These bacteria also affect how we store fat, burn glucose, and play a role in obesity.

When bad gut bacteria flourish, the lining of the intestine becomes inflamed and “leaky”. Leaked food proteins enter the blood and cause inflammation through the circulatory, respiratory, and other systems. The bad bacteria also cause weight gain by changing how we burn glucose and store fat.

Good bacteria digest fiber, produce vitamins and many other substances that keep us healthy. Scientists are just starting to identify these substances and what they do. It is a good idea to have some fiber every meal from a vegetable or fruit. (Note that fruit, with its sugars, can alter some people’s weight loss success.)

Most of our immune system is alertly standing guard in our intestines. Big guns in the form of white blood cells are needed to handle the bacteria, fungi, viruses, etc. coming in with our food and especially water. If the bad guys get a foothold it can be fatal—over half of the world’s childhood deaths (0-4) are caused by diarrheal diseases.

The white blood cells don’t take chances when an antigen appears and a vigorous immune response generates inflammatory cytokines. The cytokines inflame the gut lining and it “leaks,” meaning the joints between the cells lining the gut expand. The bigger openings allow larger molecules from the food into the bloodstream triggering systemic inflammation.

Systemic inflammation has been associated with leptin and insulin resistance. Leptin is the hormone that causes us to feel satisfied and stop eating. Insulin allows our cells to take in nutrients like glucose. Becoming resistant to leptin causes cravings and weight gain. Having 12 hours between your last and first meals may help prevent leptin resistance.

How to find an allergen—it’s not rocket science, but it is hard

The first stage in finding an allergen is elimination of exposure to possible irritants. We do this naturally. If you suspect a new laundry detergent or perfume makes you itchy, you stop using it and see if the itchiness also stops. To test it you use it and see what happens.

Food usually takes about two to four weeks to test for adverse effects.

The first step is called elimination and it is followed by reintroduction.

These are seven of the most common inflammatory food groups:

Any food or food component can be added for you personally, for example caffeine, eggs or strawberries.

Eliminating all of these out of the diet at once for 2 to 4 weeks is the quickest way of knowing their effect on you. If you don’t stop them all at once and one does have an effect you won’t know how really good you could feel.

Yes, it is hard. Yes, it probably will be worth it. Yes, it may take several attempts to pull it off.

After a month or so of detoxing you should feel great. If not, you may have an allergy to an uncommon food group, food additive, or other allergen. You may also be stressed enough that the stress hormones are causing leaky gut. You may have a pathogen or a genetic disease. You may even have had an emotional or mental upset that brought you down. The possibilities go on and on. Odds are though, you’ll feel better.

The next step may be risky for weight gain but you observe what happens when you reintroduce the food groups one by one. Leave the sugar and grains for last because they affect the balance of good and bad bacteria in the intestine. They also have little or no nutrient value to speak of, are addictive, and cause a “toxic” not “true” hunger.

By the end of this experiment you should know which food groups inflame your system causing diarrhea, body aches, headaches, brain fog, etc. You will have a lot of hard earned knowledge about yourself and your body to use going forward. The idea is try something, learn, try something, learn, over and over until you have a workable policy for you.

There are loads of foods left to eat after eliminating those above. The internet provides plenty of recipes to keep the diet interesting. Vegetables and meats should be organic if possible since any additive may cause inflammation.

Most important is that one way or another, you develop your own method to experiment and detect the effect of any food group on you.

Stress makes all this even more complicated

To complicate this investigation further, stress alone can cause leaky gut and the same symptoms as a food allergy. You should try to avoid and counter stress (for example with exercise) while doing the food group restriction experiment. If you experience higher than normal stress and have symptoms while re-introducing a food back in you have to redo the experiment. This is why careful observation and notes are needed.

For more information see my articles about stress, hormones and eating in general.

Sign up for a free account, fill out the 37-question assessment, and view a graph of your results showing the strengths and weaknesses of your current weight loss efforts, as well as your Weight Loss Success Outlook score. 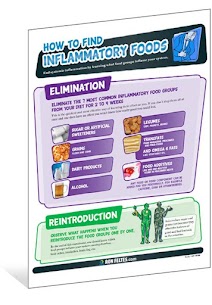 Complete this quick form to get your FREE download of my How to Find Inflammatory Foods Guide.